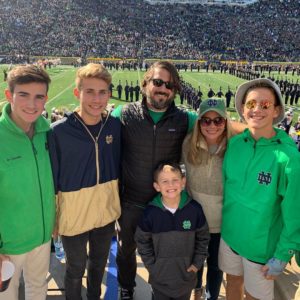 With over 20 years of experience in human resources, legal, real estate, and risk management, Todd knows what it takes to transform your back office into a competitive advantage. His holistic approach has helped hundreds of domestic and multi-national clients become best places to work.

A labor/employment and business attorney by trade, Todd began his career in private practice before becoming General Counsel and head of HR for the (then) fifth largest private residential real estate company in the U.S. Highly respected by his peers, he was even asked to provide testimony to the U.S. Congress about the challenges facing the real estate industry.

Following his time leading CP Morgan, he served as EVP, Administration at ExactTarget, which was acquired by Salesforce.com for $2.7B in 2013. During his nearly seven years with ExactTarget, Todd led all human resources, risk management/legal, and real estate/facilities functions and helped grow the business from a private, 200-person, single site operation to a public company with 3,000+ employees across 15+ global offices.

Under his leadership, Kenexa deemed ExactTarget’s culture “Best-In-Class” for employee engagement, and the company received numerous awards as a workplace of choice. Its unique culture became such a competitive advantage that it was recognized in ExactTarget’s S1 filing – the first time culture has been cited as a differentiator in any IPO filing.

After ExactTarget/Salesforce, Todd went on to found, run and consult with multiple companies, including Emplify (co-founder and Chief People Officer), Ntracts (CEO), and Cheetah Digital (Chief Administrative Officer). In all of these roles, Todd blended his legal, risk management, and human resources acumen to serve each company’s varying business needs.

Currently, Todd serves as CEO of EDGE Mentoring, a non-profit organization focused on the whole person development of millennials through intergenerational mentoring.  You can learn more about EDGE here.

In his free time, Todd has served as an Adjunct Professor at Butler University College of Business and writes for various publications about culture formation, perpetuation, and evolution. He also has served on the Board of Visitors for Butler University and the the Boards of Christian Theological Seminary, Special Olympics of Indiana, INvestEd (formerly Indiana Secondary Market for Education), and Nextech.

About Todd Richardson was last modified: December 15th, 2020 by adminCQB

Leaving your back office on the back burner isn’t an option anymore. And why would you want to, when you could instead turn it into a powerful competitive advantage?
We can help!